Is the long, empty trader’s route between Calpimede and Freischutz fraught with piracy? A hidden star-station which flies no flag?

Why did the Navy set up a base in the asteroid belt of Igerna, at the bottleneck between Huma and the twin planets of Jachin and Boaz?

Who gets assigned to the distant scout station above Fontarabia?

Oh, space adventure. I love you so.

World-building should serve the narrative… or does a well-built world prompt new stories? Much of the history and technology of the world in my podcast has been developed over the various stories I have set therein, but whenever my characters set out for somewhere new, I stall a little. What’s it like over there? Why? Enter Traveller. I grew up in the height of the “D&D causes suicide/satanism” witch hunt — and in New England, no less — so, my exposure to classic tabletop RPG’s is limited (I’m doing my best to catch up, I promise). Lev Grossman‘s The Magician King makes a reference to an old sci-fi game in a way no self-respecting geek with internet access could resist. And, wouldn’t you know it, the 1983 starter box is available for free right now (and, to all appearances, legally).

I grab it and read the core rules for my own non-writing enjoyment, including the extensive map and world creation section. All based on die rolls.

Now, randomness is a major element in this fictional world. It powers interstellar flight. It [REDACTED FOR SPOILER]. Characters obsess over it. It’s a thing. And here, lain out before me in all its non-OCR-scanned PDF glory, is a method to make a detailed sector map using chance. Magnificent.

So I get to rolling. Oh sure. I could use an online tool. But what fun would that be? 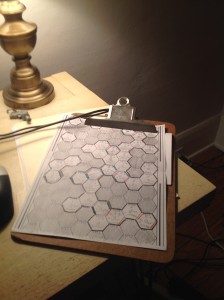 I am now in possession of a map of the sector into which Zeno and friends (and enemies, mostly) are about to jump. And where will they make their rendezvous with the smugglers of the Ghost Parade? In the short-cut space between Guelph and ringed Cestus? Over the undefended water world of Celion?

Each hex has a story, and the borders between as well. Naturally, the majority of the ruleset doesn’t apply to my world, but that’s not what I’m looking for. I just want something to elicit some conflict, some history. Some story.

I’m not saying it’s the best method — but it’s sure helped me flesh things out.