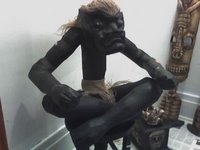 The byways roil with mist and the leaves grow sallow. Dripping black branches creak in the unnatural cold. The slow death that is autumn is upon us, and with it comes this cautionary tale.

A young gentlemen, accustomed to a quiet, sensible life of diligent work and pleasant conversation, took it upon himself to travel across the dim expanse of upstate New York to reach the city proper. The day before his trek began, a note arrived from his host-to-be.

“I have this … thing. See the attached picture – yes it does have a curse on it. It’ s about the size of a skinny three year old – it would take up about as much room as a full backpack, say. It ‘s pretty solid, but not too heavy.”

Already feeling the slimy tendrils of fear creeping along the back of his skull at the thought of driving into Gotham, the gentleman’s fancy saw this cargo as a risk to himself and his passengers, a bogy who would plague him throughout the journey. “Poppycock,” he told himself. “It is but a decoration, a maudlin statuette meant to arouse the humours. Enough of this tiresome foolishness.”

His first act upon obtaining this ebon idol was to name him, passing the action off as humor and light-heartedness. In the quiet of his soul, though, he imagined the bogy might be pleased with him. As he considered an appropriate sobriquet, the syllable “ire” seemed to be whispered into his thoughts. “‘Ira,'” he ejaculated. “‘Ira’ will do nicely.”

In addition to naming the beast in the backseat of his car, the gentleman rested the map and directions for his journey on the folded lap of the statue. Again, he played it off as a joke, when in truth he felt the beast less likely to malign him if included in responsibilities of the trip.

The majority of the trek passed without incident, lit by an unusually bright full moon and headed toward the increasingly pink sky above the city. The gentleman forgot his fears, losing them in the gentle hum of the road.

As the car approached the bridge of Tappan Zee, the gateway to the city, the gentleman called for the directions. At the exact moment that the papers were removed from Ira’s silent stewardship, a large object flew at the rapidly travelling car. A discarded paper box, large enough to hold an oven, lofted into the air and smashed into the vehicle, obscuring the view of the road. His pulse throbbing in his ears, the gentleman wondered if this, at last, was to be his doom.

A mere second later, the flattened box flew away. The gentleman and his passengers were safe, and the rest of the trip held no further excitements. Ira was delivered, never to be seen again.