Yes, the time has come for me to make a cover for Rhymer. The recording process for the podiobooks version starts this weekend, and (assuming they accept the project) I need to get the associated image ready.

Rhymer is a retelling of an ancient Irish imram (seafaring wonder voyage myth) set in a sci-fi space universe.  My goal is to convey this in an image.

I’ve been digging on all the minimalist covers/posters which have been running around online, so a few circles and vectors led to this:

Green circles = space, right?  And a sailboat where a spaceship would be = something unusual and ancient is afoot here.

My first draft of the complete cover keeps with the minimalist thing.  The font looks like 70’s mythology text to me, very D’aulaires’. 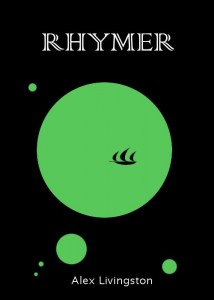 I used this as the cover for the proof copies I Lulu’d up to make editing and proofing easier. It looked OK, but much more suited to online. 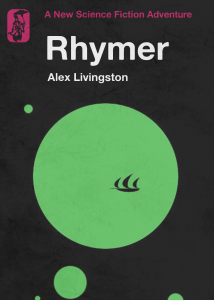 And yes, I added a distressed look because I am a book nerd. The drawing for the logo is taken from one of a hanafuda cards.  Chance, games, and weather play major parts in the book, so the Rainman card seemed a natural choice.

Of course, e “covers” don’t really need all the same stuff that RL covers do.  Like, ya know, words and all that.  Perhaps I’ll end up just using the “icon” version. Hmm….

One reply on “Cover Time”

I approve. Circles do = space, I say. It even makes me think of the huge solar system mobile my teacher hung in our 4th grade classroom. Circles also = water, though, which I think completes the connection of your nautical story re-told in space.