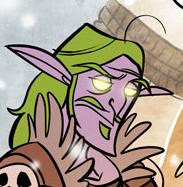 For some time now, my brothers have been my pathway to true geekiness. For example:

It should come as no surprise, then, that when I learned that Pete is currently playing World of Warcraft, I decided to try out the demo. We’re not really letter-writers, but we are certainly gamers — perhaps this will give us a chance to hang out, right?

Well, let me tell you this. PA has it right once again. From what I can tell so far, the game is mainly a steady stream of tasks involving killing X number of Y monsters. Snooze.

Now, I assume that once the tedium of grinding is done and you actually team up with people, some coolness can occur. Except that people are a pain in the ass. So, we’ll see.