Last night’s RLTP discussion included a reference to one of my favorite games — Prince of Persia. Not the fancy new wall-running version (though I enjoy that, too),

but the original DOS game. I reacted predictably.

The part in question was what I’ll refer to as the Dark Prince. He shows up a little bit into the game when you are forced to jump through a mirror. This shadowy version of yourself runs off without any sense of what his deal is. 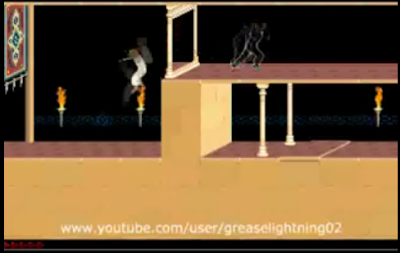 The next time you encounter him, you fall to what seems will be your death. As you stand on the precipice, he could help you. He doesn’t. Or does he just react too late? 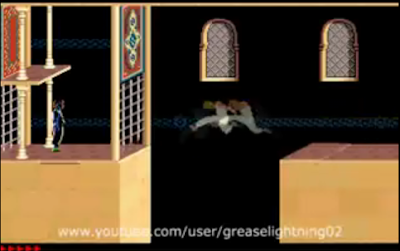 Before you face the evil vizier, you must face the Dark Prince. He’s at a fairly unassuming place — no big arena or dark cellar. He’s just there in a hallway. 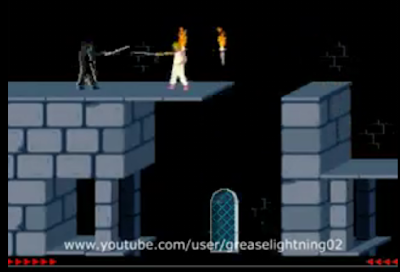 Try as you might, you cannot defeat him. Each time your sword reaches past his parrys, you are hurt. The only way to pass him is to sheath your weapon.

What a great nugget of narrative, especially considering the source. Aside from the don’t-fight-puzzle near the end (very Arabian Nights), the Dark Prince doesn’t add much to the game-play, but he certainly prompts an emotion. What is the developer saying with the Dark Prince? More importantly, what interpretations can the audience bring? You must face and accept the darkness within yourself, since fighting it will not work? Is he evil? Fear? Your opposite, or a part of you?