What if a flash game had been made in the 80’s?

I’ve been tooling around with Double Edged, a nice-looking, simple flash game over on Nitrome. It’s pretty much just head right and slash at the baddies; very reminiscent of the old 8-bit games, as so many casual games are. I can’t help but wonder, though, what would this game have been like if it were released for the NES?

No Way, No How, No Saving

After sliding the big gray plastic Double Edged cartridge into the NES, the lucky player would have been given three lives and quite possibly a limited number of what us classic gamers remember as “continues”. If you wanted to beat this badboy, you better have slated a whole afternoon and better not ever make a mistake. Or maybe you would get some unintelligible passcode which your brother would write down for you. You know, the kid whose “A”s and “E”s look exactly the same.

Oh yeah. This shouldn’t be problem at all.

Now, Double Edged has twelve levels, or more correctly three levels and twelve save points. Short, I grant you. Just remember that Castlevania had six.

The graphics would be much closer to awful 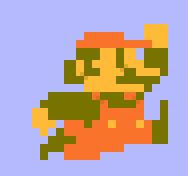 Is this the face that launched a thousand titles?

Pixel art has come a long way since Kid Icarus. Just playing as a character made out of more than nine little squares was a life-altering event. And shading? Utterly jaw-dropping.

Here in Double Edged, not only do we enjoy well-crafted sprites and scenery, but we even get to enjoy multiple levels of moving background! And the characters have shadows!

How’d you get up there?

Whoa, wait. You want to press up and move FARTHER AWAY? You are blowing my mind.

In NES land, you will go left, right, or nowhere at all. Better find a way to jump that box, because there’s no going around it.

For reasons that make little sense, the already-limited screen would have a points counter on it, hovering above you, as untouchable and judgmental as St. Peter. You know, so you could take a polaroid of your highest score and show it to your buddy Jay next time he came over. At least now you can shoot for an online leaderboard.

Yep, it just keeps ticking away up there. Kinda creeps me out.

That music will be stuck in your head for a very, very long time.

Red X, you are beauty.

So, somewhere along the line somebody figured out that not everybody likes chiptune? Being able to shut the damn music off is one of the better game developments in recent history. Sure, I like synthetic stylings as much as the next guy, but hearing the same eight bars on a loop as you repeatedly get killed by the same boss is just rubbing 8-bit salt in the wounds.

Now how much would you pay?

Minimum wage in the eighties was $3.35. NES games were fifty bucks. Nitrome.com is free. It’s a wonderful time to be alive.