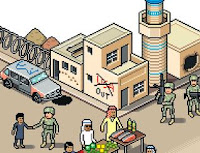 The latest issue of The Atlantic features an article on a PC game used to train soldiers on counterinsurgency tactics.  Good article, and I found myself compelled by the isometric pixel illustration which accompanied it.  The artist, Nana Rausch of QuickHoney, was kind enough to answer a few questions for us.

You’ve done quite a bit of birdview pixel art for magazines (Maxim, Fortune, et al. recently).  Any insights as to the popularity of this style of illustration?

I’ve been working in this style for the past 10 years! It’s been popular for a while. Probably it’s a good balance between realistic and abstract illustration.

The article makes reference to the SimCity series of games.  Did this influence your illustration at all, or did you depart from it?

The article in “The Atlantic” makes the reference to the Sims game, because it’s an article about a similar game that soldiers use, before they deport, to  train them for certain situations.
It is a very long time ago, that the Sims game was in isometric pixel. The Sims might be the roots for the isometric pixel style, but it has long gone it’s own way.

What software do you use?

One of the impressive (and fun) aspects of pixel art is the illustrator’s ability to work past the inherent limitations in line and detail.  For example, three pixels become a bullet hole, or a single-pixel strip of white makes an ovoid shape into a slab of fish.  What is your favorite detail in this illustration?

I think my favorite part in the illustration for “The Atlantic” is the rotten car.

What games are you playing right now?

Just got an iPhone. So I’m playing a bit there. Other than that, I’m not playing much these days. The times of playing Playstation all day are somehow over for me.
Thank the gods for the iPhone: the casual gaming portal for the hip crowd.  And many thanks to Ms. Rausch!
Tweet