I love playing cards. (In both senses.) I recently started collecting them, and will spare you, Gentle Reader, from a few thousand words of nerding out on the topic.

I also love The Magicians series of books. Please allow me a few dozen words of nerding out on the deck of cards Quentin uses in his test in the first episode of the Syfy series.

When Q does his first “magic” trick, it looks like we’re dealing with a regular of six of spades here. When he flubs his next flourish and drops them on the ground, it looks like more of the same. 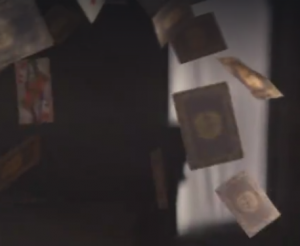 Immediately we are treated to a Queen of Hearts from an older generation. Recent enough that the picture is the same if flipped, but old enough that the value isn’t listed in the corner.

Also, we see these card backs. What’s going on with those? Let’s keep nerding and find out. 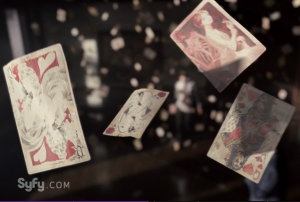 Enter the other Queens of Hearts.  Some funky designs here. Custom illus for the show? The bottom right appears to be a modification of an historical card (http://www.madore.org/~david/misc/cards.html) , but the others are beyond my google image search ability. A woman on a chair tying knots? Some art deco thing with roses? Any advice appreciated. SEE AMENDMENT BELOW.

Not sure what we’re foreshadowing here, but you can’t get much more clear that they want us to be thinking of Q Hearts. The Queen of Hearts is certainly representative of the danger inherent in going down the rabbit hole, so maybe that’s it.

Our final shot gives us another look at the Queens of Hearts (and a few other cards), and a chance to really check out those card backs,

Gold on black aligns with all the Brakebills logo stuff related to the show, so we’re prolly looking at a custom printed deck sold in the school gift shop. 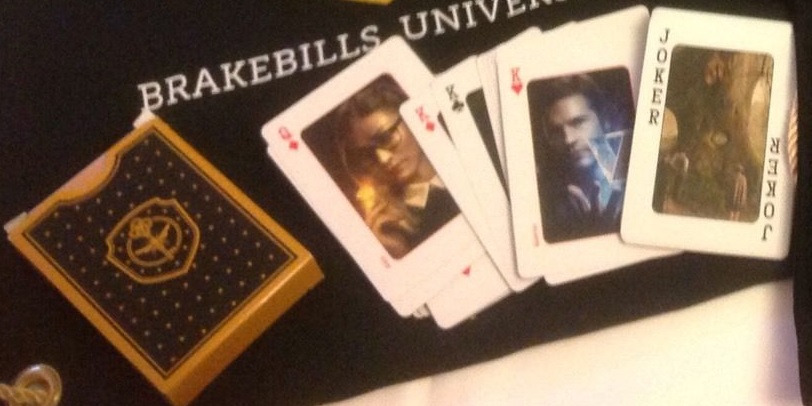 Above is a clip from a pic on ebay of some Brakebills swag from Comic Con. A simple bee-and-key card back.

And here’s a clip from a promo shot, ft. the eternally-five-o-clock-shadowed Quentin doing some prestidigitation: 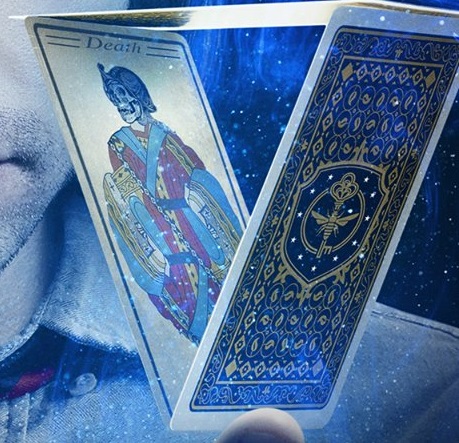 So we’ve got an antique-playing-card-style figure with a skull plopped on top, and declared to be the tarot card Death. I am surprising myself by having little issue with this. This is magic, after all.

Now here’s a much nicer black and gold back with the bee and key crest. I thought the rotating leaf pattern was a bunch of different occult symbols at first, but sadly no. UNLESS the orientation of the leaves stand for different letters….

Back to the deck in the show:

After seeing the promo images, it’s pretty clear we’re looking at a Brakebills logo deck with a very nice art-deco-branches thing going on around the border. Lovely! I hope Quentin got to keep it.

That seems to be a 1986 commemorative half-dollar. Any guesses as to why?

Amended! Perhaps unsurprisingly the book has the answer to the multiple Queens question. Just went back and read the scene. Kudos to the show!