Played through the new Assassin’s Creed DLC last week.  Yes, yes; I know I should be writing, but a guy’s got to take a break now and then, right?  RIGHT?  And why not go back to Roma?

Allow to confess to you my delight at seeing dear old Leonardo again.  And that’s the thing — for a moment, it felt like I was seeing an old friend for the first time in years.  Not some NPC, not a character in a movie.  Someone I’ve watched grow and change.  Someone with whom I have interacted.

Now, before you get any images in your head of me weeping into my hankie at the sight of polygonally-represented Renaissance artists, let’s move on.  The question is, why was this different?  I’ve seen recurring NPCs before.  Why did I smile when this one came to the screen? 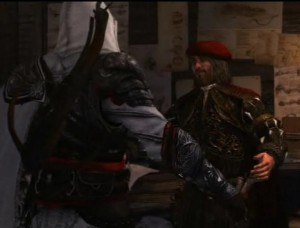 The representation of the friendship between Ezio and Leonardo has been very satisfying throughout the series.  In stalks a murderous thug, an armor-padded linebacker.  Up from the ink-stained desk rises the bird-boned polymath.  One man-hug later and you’re in.  These two guys are genuine friends and have been for decades.  Leonardo is more than the Merlin or the Q — he’s an actual part of the main character’s life.  These guys know each other.  The last beat of the DLC (which I will not spoil here) drives this home particularly well.

In a form surfeit with square-jawed white males in their thirties whose entire emotional range starts with a wisecrack and ends with a grunt, taking the time to show an actual friendship between men is a worthy accomplishment.