If you haven’t seen the opening cinematic of the upcoming The Beatles: Rock Band, you really ought to. Here’s my attempt at annotation. This is mostly from memory, so please feel free to contribute.

update — contributions have been labeled with initials.
latest update 6-7-09

We start off in Liverpool, with the Fab Four playing at The Cavern Club, the bar in which more or less had their beginnings. As we pan down, we get a lingering glimpse of posters featuring the names of several songs and lyrics. 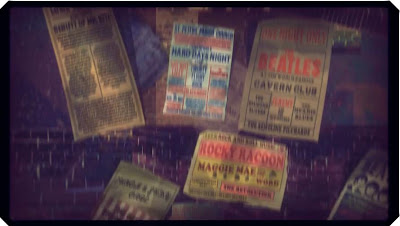 The Meanie Blues (reference to the Blue Meanies from the Yellow Submarine movie)
My favorite reference here is “The Semoline Pilchards” (lyric, I Am the Walrus).

Out on to the street in avoidance of throngs of screaming teens (which, if I remember correctly, was the plot of Hard Day’s Night). And, wouldn’t you know it, there’s an Old Brown Shoe (title) in the alley. 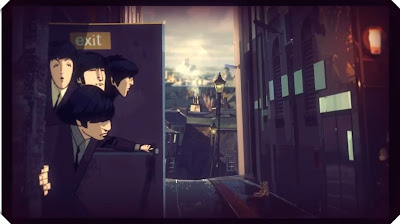 The dash includes this shot: 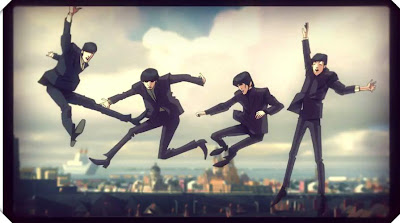 Based on this photo: 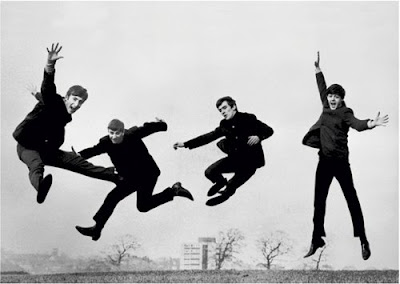 Next up, a road featuring Maxwell’s Silver Sundries (song title, Maxwell’s Silver Hammer) and a fireman, who I assume likes to keep his fire engine clean (lyric, Penny Lane). Maxwell Edison was majoring in medicine (lyric), and perhaps thus the Surgery sign. Also look for the lizard outside the window (lyric, “lizard on a window pane”, Happiness is a Warm Gun)

I believe there’s a stack of pennies on the lane (or sidewalk) underneath the fireman. I’m willing to bet the WANTED poster is Bungalow Bill (notice the pith helmet). (TRB) 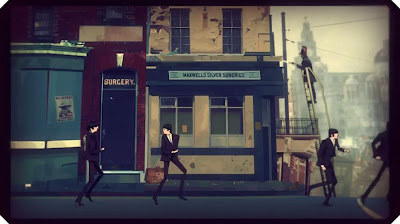 And poking his head out of the hole in the ground in which he sleeps is Mean Mr. Mustard (title, lyric). (TRB)

Duck into a restaurant, whose menu is surely all references. “Fish and Finger Pies” is from Penny Lane, and Hippy Hippy Shake is a title — tough to read much else, but there’s clearly more. The restaurant lists mostly items from “Savoy Truffle,” but also includes “Honey Pie.” (TRB) “One and One is Two” is a title, as is “Mean Mister Mustard” (above the door). The Grapes was one of the Beatles hangouts. 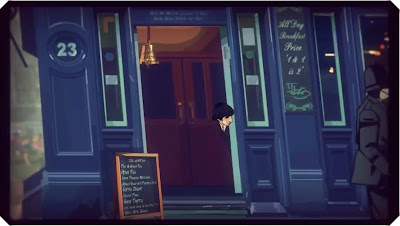 An Abbey Road (album cover). Where’s Paul cigarette? On the left in the back, the horse with the H blanket is Henry the Horse from “Mr. Kite” (TRB) I think the mailbox on Abbey Road is actually a newspaper vending machine for the paper “What Goes On” (title) (TRB) 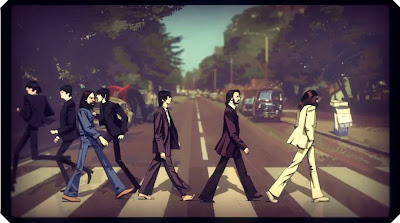 And who’s that in the background as they get in the car? It could only be Lovely Rita, meter maid. (title) Without the bag across her shoulder she doesn’t look very much like a military man, but she can give us a wink anytime. 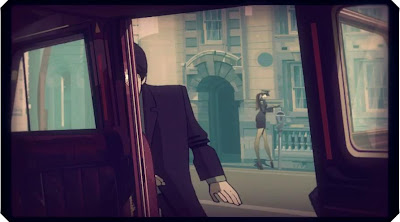 And a gift basket from Strawberry Fields Farm (title) in the car. How nice!

It even includes a green apple, which is the logo for Apple Records. (MG) 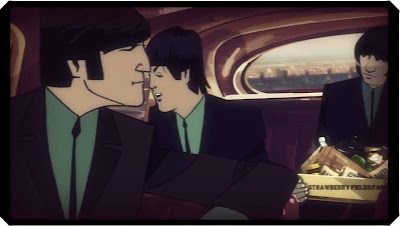 Next up, the arrival in the States. Also, a yellow submarine (title, movie) can be seen in the river. (MG)

I’m fairly certain the sound of the plane as it lands is from Back in the USSR. 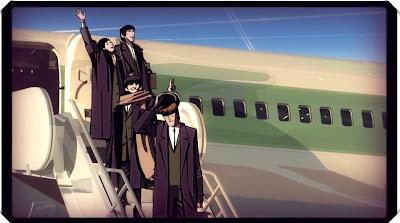 On to the Ed Sullivan show. 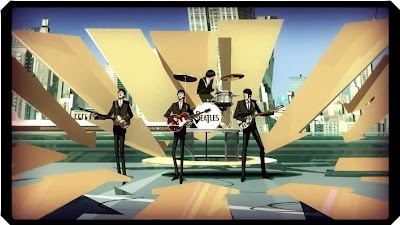 and some other venue. (Anyone?) The typewriter’s got to be a Paperback Writer reference, right? 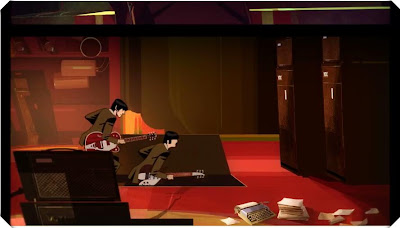 Next up, Shea Stadium. 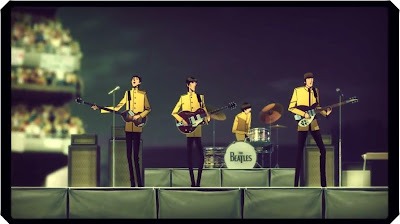 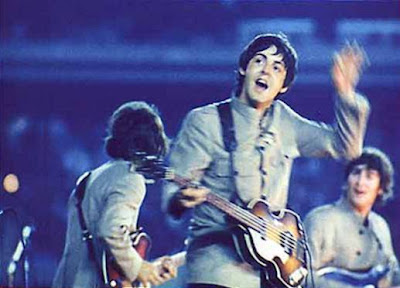 And then things get… a little weird. Sgt. Pepper uniforms appear on our favorite moptops. 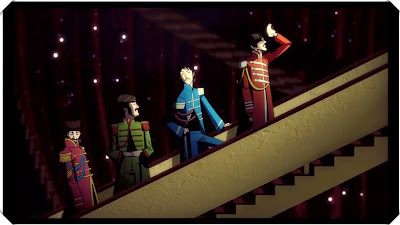 Note the Lucy in the Sky with Diamonds (title) on the left. Can we safely say those are eggmen on the right? (lyric, I Am the Walrus) 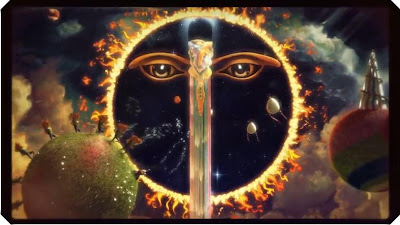 Here’s a fellow whose stomach says Goodbye and Hello (title). Is the “stupid bloody Tuesday man”? (lyric, I Am the Walrus)

The piano on the left of this shot is from the promo video from Strawberry Fields Forever. “I think the audio equipment in the English Garden is from the outdoor recording sequence in Help! as well as the silver teapot (Buckingham Palace scene?).” (TRB) Needs verification 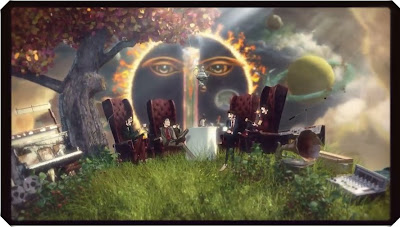 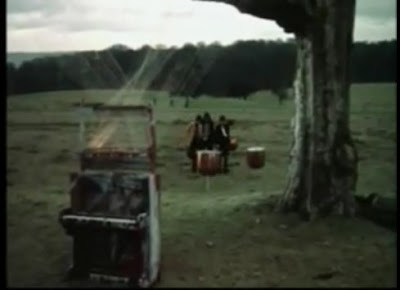 Is this a newspaper taxi? (lyric, Lucy in the Sky with Diamonds)

There’s a very brief glimpse of the top of the giant drums, which shows they are the drum from the Sgt. Pepper album cover, (JK) 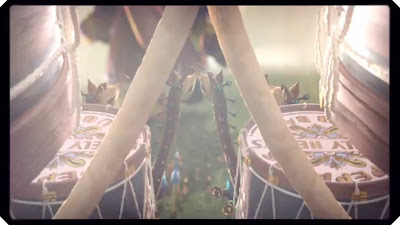 The costumes from I Am the Walrus. 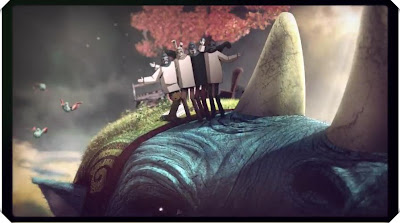 A quick shot of a Blue Meanie (from the Yellow Submarine movie). Are these elementary penguins? (lyric, I Am the Walrus — TRB) 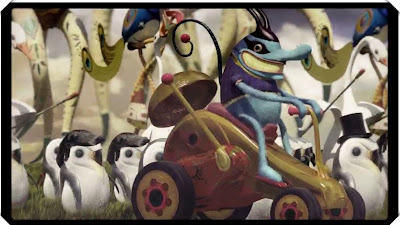 And this last shot of them… so familiar but I’m not sure from what. Anyone? 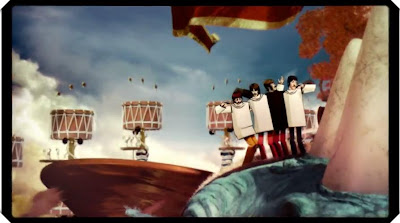 Perhaps the pose at least comes from this. The order of the boys and color of their pants are correct. (TRB) 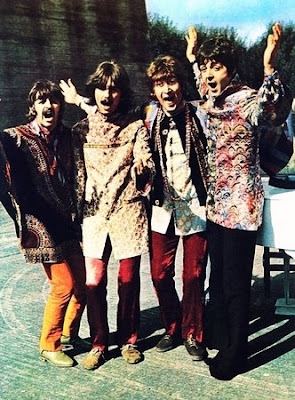 The Beatles are riding the elephant god Ganesha: Lord of Success at the end. (TRB) 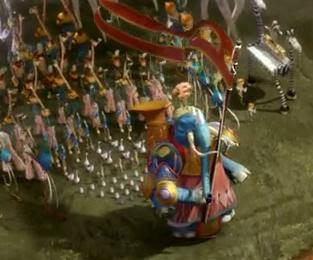 Fairly certain the last note heard is the second to last note from “Day in the Life”.

Thanks to Todd, Garv, and Johnny K for excellent contributions.