In this latest installment, we get enjoy the musings of one Mr. David Cumbo.  David currently works for Insomniac as a cinematic layout artist (aka “cutscene guy”). 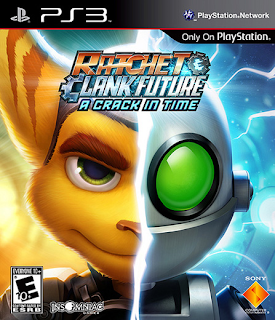 #1 — You’ve been working in the VG industry for a while now (Ratchet and Clank, Resistance, etc.).  What piece are you most proud of?
-I worked on Ratchet: Future 1 and 2, and Resistance 2.  Of those, I think we did the best work on Ratchet Future 2, which is good since it’s the last game we did.  The quality of the work produced was higher and the story was more cohesive.
#2 — How does directing a cut-scene cinematic compare with directing a movie?
-Game cinematics are made through a variety of means.  Most typically, they use game assets rather than custom models.  Often, the game models are up-res’d to accommodate close-ups and various cinematic needs.  We’re limited in many ways compared to film production.  We need to work within the confines of the game engine and its custom cinematic tools.  In addition, all assets to be animated need some degree of rigging to allow the engine to recognize their movement.  We need to think creatively to get around all these limitations.  Maybe we want a close up but the model is too low-res so we need to figure out a different shot.  Our cinematics are frequently located in spaces shared with gameplay.  Since fun gameplay is our highest priority, we may need to make different choices in the scenes.  In film, temporary adjustments can be made to get the shot working and then moved back.  Other than the aforementioned limitations, the creative nature of making a movie is identical to animated film production.

#3 — What game are you most jealous of not getting to work on?  Why?

-Insomniac made Spyro the Dragon.  I think I would’ve enjoyed that one.  Don’t know why, I just think the characters are cool and a good story can be set in that world.  I remember digging the original game in high-school.

#4 — What old game deserves a reboot?

-Of Insomniac’s?  I suppose Resistance is a sort of advancement of Disruptor, but I think the sci-fi world in that game is interesting and could use a modern lift.  Of course, Spyro was awesome.  But hey, as far as my favorite lost series?  Day of the Tentacle… Earthworm Jim… Jet Force Gemini…
#5 — What are you playing now?

-To be honest, I don’t play an awful lot of games outside of work since I have to sit at a computer screen all day 😉  BUT, I have recently been playing Banjo-Kazooie: N & B.  That game is amazingly creative.  I’ve always been a huge Rare fan.  The game allows you to beat its challenges in many different ways by constructing your own vehicles to tackle them from different directions.  It’s like playing Mario, but instead of figuring out what they want you to do, you think about what has to be done and make your own way of doing it.  It really is impressive how much depth they put in the vehicle creation interface.  One of the bravest and most underrated games in the industry today.  The last game I finished was Haunting Ground on the PS2.  Lots of fun.  I love that type of twisted story and I’m fascinated by games that put you in a powerless role rather than trying to make you feel like a BADASS all the time.  Before that, Silent Hill Shattered Memories, which, other than Silent Hill 2, has the best story I’ve ever experienced in a game.  It was beautiful.

Thanks David!  And keep us posted on your latest!